PoE supplier shares this article for you.

The scientific and rational use of industrial Ethernet switches in distribution networks can effectively save operating costs and effectively improve the reliability and safety of distribution network operations. This paper mainly analyzes the main performance of PoE Switch for Ethernet terminals, hoping to fully meet the power supply requirements of urban modernization, and then promote the smooth development of urban modernization.

In recent years, the supply market model has changed from the original seller's market to the buyer's market. In the context of the rapid development of social economy, the majority of power users have higher requirements for the quality of electrical energy, and also pay more attention to the reliability and stability of power supply. In terms of power supply reliability, the following regulations have also been made: in some important urban center areas, the power supply reliability must reach 99.99%, and the average power outage time for each user must be less than 50min; The two indicators are specified as 99.96% and 3.5h respectively. In order to fully achieve this goal, it is necessary to improve and optimize the distribution mode. The scientific and reasonable application of industrial Ethernet switches in the distribution network can effectively ensure the quality of power supply, improve the stability and reliability of power supply, and thus fully meet the power supply needs of my country's urban construction. 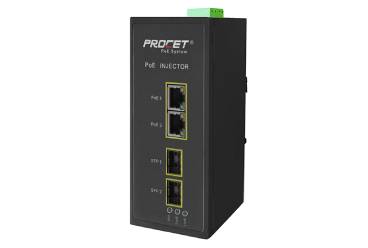 2. The performance of industrial Ethernet switches in the distribution network

Set the backbone ring network layer to be a switched three-layer network composed of three layers of industrial Ethernet switches. This network has huge functions and has gigabit redundancy. In the process of accessing the backbone equipment business, it is necessary to Redundant fast ring protocol and OSPF protocol is used, among which OSPF protocol is relatively mature and has strong openness. Once a certain fiber link and a certain aggregation switch have a problem, it can effectively ensure that the system generates a switching time of more than 50ms, and thus provides an important guarantee for the effective resolution of the problem.

2.1.1 Broadband occupied by the backbone network

If a certain distribution automation system implements calculation operations according to 1000 bytes, then in this case, the data that each node must send is 64B, 128B, and 256B. And the main station will carry out the round-robin operation once every 50ms. Not only that, for the bytes with different packets, they will also occupy different broadband rates.

The Industrial PoE Switch currently has a broadband of 100M, and for packets with different bytes, in the backbone network, the role of the 30-level backbone network will be exchanged to generate 0.075ms and 0.09 respectively. ms and 0.12ms delay. And we can understand through in-depth analysis that the real-time nature of the backbone network is mainly determined by two main factors. One factor is the size of the message, and the other factor is the number of cascades that occur on the network. At the level of demanding ms-level business data, we can judge the delay of the backbone network, which can fully meet the real-time requirements of the data, and will not have a great impact on its real-time. Under such circumstances, it can effectively ensure the reliability of the network and fully meet the needs of distribution automation.

The layer 2 industrial Ethernet switch can be used as a sub-ring network layer device. The optical fiber redundant ring network is constructed by the secondary ring network layer equipment and the backbone network existing within the management scope. Once an aggregation switch or a section of fiber link has operational problems, it can use the redundant fast ring protocol to repair the uplink path, which can effectively promote it in a very short time. Self-healing. And it needs to complete the switchover within 50ms so that it can complete the backup link operation well, and then effectively ensure the reliability and stability of the distribution network.

According to the number of box transformers and local switching stations and other data to determine the division of the substation ring network, and to use 100 nodes to complete the calculation of each single ring network, each node data will be sent out Keep at 64, 128 and 256B, and the main station will implement a round-robin activity every 50ms.

Because the bandwidth of industrial switches currently is 100M, and for packets with different bytes, in the backbone network, the 100-level backbone network will be exchanged to generate 0.7ms, 1.2ms, and 2.2ms, respectively. Delay. And we can understand through in-depth analysis that the real-time nature of the backbone network is mainly determined by two main factors. One factor is the size of the message, and the other factor is the number of cascades that occur on the network. These two factors jointly determine the real-time nature of the backbone network. Therefore, when selecting data packets, 128B packets should be selected as much as possible. The number of devices set in each single-ring network must be controlled within 50 ranges as much as possible to ensure that the delay of the transmitted data cannot exceed 1ms, so that it can fully meet the power system's proposed, From the occurrence of the fault until it reaches the isolation system, it must be controlled within 20ms.

In a word, in the era of rapid social and economic development in my country, my country's electricity supply market has gradually changed from a seller's market to a buyer's market. The majority of users of electric power also put forward higher requirements on power quality and power supply safety and stability. With the rapid development of cities, distribution automation is also facing more development opportunities. Therefore, in order to effectively ensure the stability, reliability and quality of power supply, more advanced technologies must be adopted. The reasonable application of Ethernet switches in the distribution network can effectively improve the automation level of the distribution network, and then better ensure the quality of power supply to ensure the safety and stability of the power supply, which is worthy of widespread application.